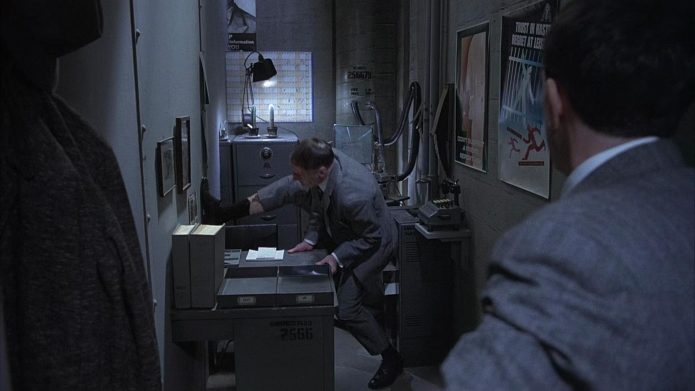 My absolutely least favorite chore is a trip to the post office. I’d rather stick needles in my eyes than be subjected to the long lines, milquetoast service, and the crumbling, embarrassing building that used to represent one of America’s greatest achievements.

Situated between a bowling alley and an auto body shop, the low flat-roofed brick building has turned nearly black from lack of cleaning over the years. On the front are tall windows held in place by steel frames that look like bars on a prison cell. The parking lot is a pock-marked minefield.

No matter what time of the day, there are always about ten people in line and only one clerk on duty– who is the slowest postal clerk in the history of postal clerks. The countertops, windows, and shelves are piled high with envelopes, packages, and boxes waiting to be processed.

It’s dusty and dirty, and the big screen TV on the wall that should be providing valuable information to customers instead displays a message that seems appropriate: no connection. The space looks for all the world like a scene out of a dystopian film. Think of Sam Lowry’s office space in Terry Gilliam’s Brazil.

In front of me was a young Navy guy with a huge package that needed to be weighed, labeled, poked, and prodded by the young female clerk with long gorgeous silver dreads, three-inch long fingernails painted the same color silver, and the perfect confident, nonchalant approach to her work that said, “Look I know you’re frustrated. I’m frustrated, too. So, Ima try to get you out of here as quickly as I can. But don’t test me because I ain’t playing.”

She was new here, and true to form she was the only one on duty.

Behind me were five people, all with the same blank expression that telegraphed the fact that they, too, hate the post office.

Suddenly the door to the lobby swung open, and in scurried a young boy about three in dinosaur pajamas. He was blond and blue, and he bore a huge toothy grin as he giggled his way into the service lobby.

Behind him was his mother: tall, attractive, with graying hair and sweet look in her eyes. In her left hand, she held what look like a green nylon dog’s leash, and as I followed the course of that leash, I realized her boy was strapped into a harness at the end of it.

I have no problems with parents that feel the need to have this product available to them. But as I kept watching the boy squirm and attempt to flee—all the time laughing his head off—I understood. He was invigorated by being around people, and he was in continuous motion as he reached out to touch everyone around him, only to be gently reined in.

At one point he released a delightful laugh that actually made me chuckle. His mother saw me watching, and I said, “You deserve mother of the year. He’s a handful.”

“Yeah, he wants to hug everyone,” she replied. “Plus he’s on the spectrum, so that makes it even more interesting.“

The boy was staring directly at me during the exchange, that big grin on still on his face, then suddenly spread his arms wide over his head and made a move towards me. His mother pulled him back with a gentle “No.”

“OK,” she said with a shrug which meant be careful what you pray for.

She unfurled the leash, and he barreled toward me, almost knocking me off my feet as he grabbed my left leg, wrapped his arms around it, and squeezed tight. He rocked back and forth, delighted yelps emanating from him. I rubbed his back and said, “Thank you buddy, that makes my day.”

His mother and I smiled at each other as she gently pulled him back to her side. I glanced at the other patrons, and some were smiling, too. Like the Grinch, I felt my heart grow three sizes bigger.

It was then my turn with the clerk. I purchased my stamps and thanked her.

I stopped in the lobby to stamp my envelopes, a chore which no longer seemed like a burden. A few minutes later, the boy and his mother walked out and towards and the exit.

As they passed me, I said, “He’s a beautiful boy.” She paused at the half-opened exit door and turned towards me.

“He is so lovable and loving, but it’s a lot of energy and work. He’s nonverbal, and when his mother found that out when he was three months old, she abandoned him.”

“That’s horrible,” I replied in disbelief.

“I took him in, knowing all that,” she said. “I had already raised three kids, but I couldn’t let him go into the system.”

“Kids like him don’t survive the system,” I replied, “Bless you for saving him.”

“Thank you,” she said with a tight, slightly sad smile. “I needed to hear that today.”

“And I needed that hug today,” I replied.

Then she was gone, dragged out the door by a three-year old boy on a green leash who was on his way to make someone else’s day.

I’ll Give You A Topic