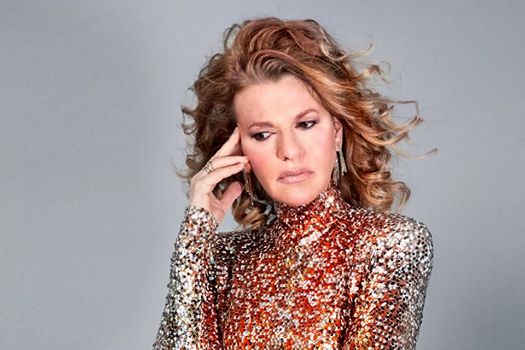 Sandra Bernhard has been a show business stalwart for some three decades in a career that has seen her in films (most memorably in Martin Scorsese’s “The King of Comedy” as psycho-stalker Masha), off-Broadway, Broadway, television (“Roseanne,” “Will & Grace,” “Difficult People”), and now radio. But it is her solo stage shows where she mixes music and commentary in equal measure that show Bernhard at her pointed best.

For the past three years Bernhard has added radio personality to her resume with a daily show on Andy Cohen’s SiriusXM channel called “Sandyland” that has endeared her to many new fans. On the show, she interviews other celebrities as well as offering her pointed commentary on a variety of pop culture subjects.

“Sandemonium” is an extension of her radio show: a nod to craziness with the wisdom and sanity of someone who’s been here before, plus a touch of her signature sass and snark. “This too shall pass,” she consoles. “Trump’s not going to be president forever. We had Nixon. We had Attila the Hun, and humans lived through that.”

Outwire757 recently spoke with the eclectic performer and long-time LGBTQ advocate for more of Sandy’s Words of Wisdom.

OUTWIRE757: So you are everywhere all the time right now. I love that.

OUTWIRE757: But you’ve always been prolific. I saw your show at Jane Street in 2001. What’s the biggest difference between 2001 Sandra shows and your current ones?

BERNHARD: I just think it’s about shedding your skin as a performer, and every year that you hone your craft as an artist you come closer to your essence. I think sometimes I’m more able to access more of my emotions without becoming maudlin. Of course, that’s a no-no in my world. I just think I’m always able to maintain a certain distance and certain sophistication about my material and my approach to my performing. So, in many ways, it’s a continuum and in some ways, I’ve stripped away more and more of the artifice. But that artifice is part of what makes a performer interesting.

OUTWIRE757: So, from everything I’ve heard, we can expect more of Sandra’s world when “Sandemonium” blows into town.

BERNHARD: Yeah, yeah. My world has always been funny mash up of the outside world and the inside world. So that continues. And as the world keeps spinning on its axis, and you see more and more of the craziness, it’s up to your artists and performers to distill out the crap and give you the diamonds.

OUTWIRE757: You know you’re going to be in the heart of Pat Robertsonland, right?

BERNHARD: Yeah, but I figured this is a performing arts center, and wherever you are in the country right now, there are pockets of people who are starving for alternative entertainment. I’m sure plenty of great people will show up. In my Sirius radio show “Sandyland,” I’ve actually reached people who never knew what I did, and they daily listen to me and call me up and say, I don’t agree with your politics, but I love you. So, it’s a funny thing, and I’m sure some of those people will show up, too. And they won’t be offended by the show. They’ll be uplifted and entertained, and maybe have some light shed on things they might not have ever been exposed to.

OUTWIRE757: Speaking of “Sandyland,” how’s the adjustment to from live performance to radio, and center stage to talk show host?

BERNHARD: It took a couple of months to get my sea legs, but once I got my rhythm, it’s been great. And again, I open up a show with something akin to what I do in my performances–not as well-honed, but some sort of improvisation about what’s happened in my day and or what I’ve heard about from the world, whether it’s music, fashion, or politics. I try to keep it very eclectic, and so it is kind of a natural fit. It’s also more conversation that interview anyway. I mean, I drive the conversation and keep it going, but I just want to bring out the best in the people in have on.

OUTWIRE757: Growing up the 60s and 70s, we had no openly queer role models. But there were plenty of pop culture idols. Who did you identify with?

BERNHARD: Oh my god, so many people. From Mary Tyler Moore and Carol Channing, Barbara Streisand to Carole King, Joni Mitchell, Janis Joplin, Tina Turner. I mean, all the iconic people of the day. They had a profound influence of the way I perceive the world and how I perform.

OUTWIRE757: Do you kind of miss the rough and tumble queer world of the 60s and 70s? Are we too gentrified now?

BERNHARD: Yes, I do think so. And yes, I do miss it. When I first moved to LA in 1974, and I was out every night dancing at Studio One with all the people celebrating, just going crazy, it was just a different world. It was separate from the straight world, and yet sort of unapologetic. I do miss that, and of course the AIDS crisis had so much to do with the change in the culture. But, you know, wanting the equality naturally moves people to be more mainstream, and you do lose some of the fun and spontaneity of those times.

OUTWIRE757: But now I know kids who are barely teenagers who are coming out not only as gay or bi, but trans. Some are even transitioning with their parents’ support.

BERNHARD: Oh yes, I think that’s really great that parents now just go, well, you’re on your path, and I’m here to guide and support you. As it should be.

OUTWIRE757: Now you’re a parent of an adult woman. How does your experience inform your parenting?

BERNHARD: A lot of it pivots off the relationship I had with my mother. She was great, an artist, one of a kind, but she wasn’t always there in the way I needed her to be. I try to step back and let my daughter be who she is. But when she needs more of me or my partner (of 18 years, Sara Switzer), we’re here. I think that we dole out good advice. We don’t impose it, but when we see her having missteps, we jump in. We give her a lot of space, and a lot of love.

OUTWIRE757: I believe you said that your iconic role as lesbian Nancy Bartlett on “Roseanne” was both a blessing and a curse.

BERNHARD: I never said that, I think that someone must have misquoted me. No, I love the role, she’s back, and my episode airs sometime in May. It’s really fun. It reintroduces Nancy and picks up where she left off. Yeah, I love that character and I love the ensemble. I just wish it was less politicized than it is. But I feel like now everyone is calming down and enjoying the show for what it is: a funny, down to earth commentary on working middle class America.

OUTWIRE757: From Nancy’s perspective, what do you think ever happened to The Lunchbox?

BERNHARD: I think we sold it, or just dumped it, or declared bankruptcy probably.

OUTWIRE757: Will Sandra Bernhard make an appearance on “Will and Grace?” Perhaps with another apartment to sell?

OUTWIRE757: Finally, where is Masha today?

BERNHARD: Masha today is probably running a nonprofit organization. She finally got her shit together.