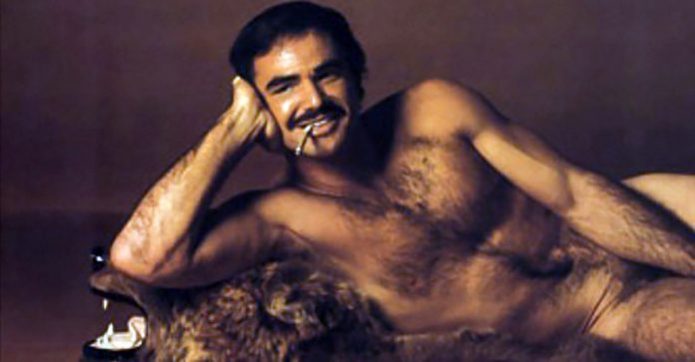 When I was 12, in 1974, my parents started bidding me out as a babysitter for all their party animal friends with kids.

“Yes, Eric loves children,” I overheard my mother say to one of their Ice Party drinking buddies. “We’ll bring him over abound seven, and then you can ride with us.”

I hated it. But I loved the cash in my hand at the end of the night.

After I put their kids to bed, I also loved investigating their houses.

A German couple that I particularly enjoyed babysitting for had a wall full of self-help sex books, including the iconic Joy of Sex. I would inevitably be drawn to it, with its pen and ink illustrations of various sex acts: long haired women and mustached men getting it on in every form and fashion.

But artist renderings of heteronormative sex were not quite enough for my burgeoning libido. It wasn’t until my parents pimped me out to our neighbors, Bill and Stephanie, that I experienced the truth of my sexuality.

I discovered Burt Reynolds at their house.

On my first visit, I walk into their den and was greeted by a life-sized version of Burt’s famous Cosmopolitan nude centerfold displayed unabashedly above the sofa. My eyes grew wide as I slowly examined the length of the six-foot long poster, taking in every inch of his incredibly muscled, tanned, and hairy body. He was stretched out on a bear skin rug, one hand placed strategically between his legs, the other supporting his head of jet-black hair, and a mischievous smile that said, “I know what I’m depriving you of.”

After my parents left with Bill and Stephanie, I couldn’t wait to get their girls to bed so I could examine Burt more carefully. Once they were tucked in, I cued up “The Age of Aquarius” by the Fifth Dimension and hopped up on the sofa for a closer look.

Little did I know that what was turning me on had also turned on women all across the globe.

The 1972 photo — Cosmopolitan magazine’s first male centerfold — was a radical statement at the time. With its publication, Helen Gurley Brown put it out there that women had desires that deserved be acknowledged and catered to. Its publication sparked revolution a in women’s magazines.

Looking back after Reynolds’ death yesterday, the centerfold has a powerful legacy. It captivated readers, challenged ideas about sexuality and spawned a wave of new publications. And while it was the start of Reynolds’ legacy as a sex symbol for women, it was also the start of a longtime male crush for me.

From that moment on I was an uberfan. I saw all of his movies of the 1970s, from Smokey and the Bandit to The Longest Yard. I picked up any magazine that bore his face on the cover. And I fantasized that he would someday arrive on my doorstep to rescue me from my dysfunctional household and adopt me as his son.

As I matured, that obsession mellowed a bit, but never dimmed completely. I watched his movies that had been released before I was old enough to see them: Deliverance, White Lightning, The Man Who Loved Cat Dancing. I kept my eyes out for old reruns of his episodes of Gunsmoke and his super-sexy lead role as police investigator Dan August.

Much to my delight, he turned up in a hilarious cameo on The Golden Girls in 1986—still one of my favorite episodes. I watched Evening Star every week just to watch him chew up the scenery in a role that lead to numerous Golden Globe and Emmy nominations.

He possessed an incredible charisma on screen and off, and he delivered his performances with an infectious grin and twinkle is his eye. He was the complete package, my ultimate definition of strong masculinity and gentle kindness all in one.

And he is still one of the sexiest men in the world.

Here’s to Mr. Burt Reynolds (said in Blanche Devereaux voice) who passed away yesterday at the age of 82.