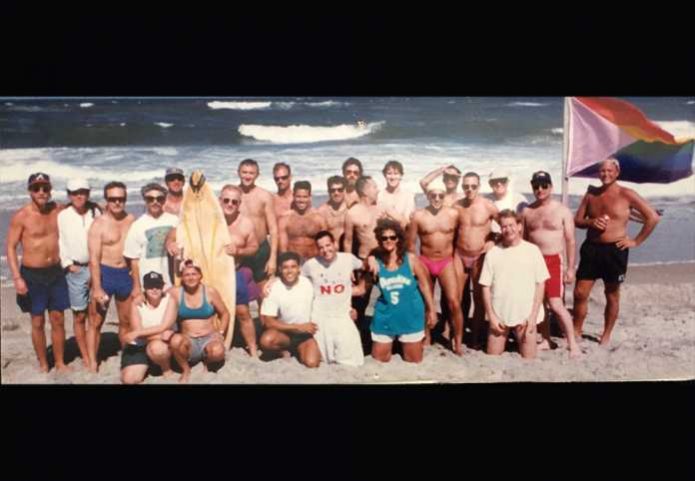 I moved to the Outer Banks in the early 1990s to take a job as Director of Marketing and Public relations at The Lost Colony Outdoor Drama, and it was a dream come true in so many ways. Seriously, a job at the beach in theater marketing?

I simply assumed that the many gay locals I met were out as well. Surprisingly, that was not the case. The Outer Banks then was generally not an LGBT-friendly community, Lost Colony notwithstanding. My impression was that many of the locals considered the gay enclave clustered on the north end of Roanoke Island to be a necessary prerequisite for having a thriving and professional theater company.

But, boy, if you were a gay native of Dare County, you stayed deep in the closet.

There were no gay bars and social or support outlets in Dare County. When we wanted to go out on the town and dance with our people, we’d pile in someone’s car and make the two-hour (or sometimes three, depending on traffic) trip to Norfolk for the weekend. In the harsh winter months, it seems as if all we did was huddle up at someone’s house and drink ourselves silly.

Finally, a group of my Lost Colony friends and co-workers decided to create those missing social opportunities. The name of our fledgling group was the Outer Banks Gay and Lesbian Community (or GLC for short—because we had to have a secret code).

We began by approaching those few businesses we knew were gay owned. At the time, that was Sam and Omie’s in Nags Head and Art’s Place in Kitty Hawk. We asked and they enthusiastically agreed to host an occasional private party just for us: invitation  only, closed to the public. Plus you had to know the secret code to get in if we didn’t know you. Privacy was paramount. There were many prominent people who joined our group as long as we guaranteed it.

We also built a newsletter mailing list by quietly networking and spreading the word—quite an undertaking in the days before email. I wrote it on the computer in my office and printed copies on the company Xerox machine. I figured that was OK after all the gay community had done for The Lost Colony over the years. We funded the postage out of our own pockets.

We started holding GLC Beach Days during the warm months at Coquina Beach (we called it CoQueena). Those beach days were some of the best of my time on the Outer Banks. We flew a ginormous rainbow flag on the dune so that any weary gay travelers on Highway 12 would know where to find our safe spot.

We always had a big crowd. We held ocean kayaking races, fishing tournaments, and best tan competitions. Afterwards, we wrapped it up with a visit to the Oasis Restaurant on the Nags Head Causeway to hear Laura Martier wail the blues.

Eventually, we started collecting donations to fund the newsletter. We collected enough to take out classified ads in regional gay publications such as The Washington Blade and Our Own Community Press (in Hampton Roads) promoting our private parties and beach days to tourists. We often had vacationers join us as a result, and I made some great friends, many of whom I still count among my besties today.

I moved to Norfolk in 1998, and the group kept plowing away. Eventually, my new life took precedence, and I lost the pulse of what was happening with the GLC.

Then eight years ago, one of the GLC’s founding members, David Miller (who has been associated with The Lost Colony since the colony was lost) founded OBX Pride, Inc. and produced the first-ever OBX Pridefest.

Imagine that! A full on, in your face gay pride celebration on the Outer Banks. It was exciting and somewhat disconcerting at the same time. How would the community accept this public display? It had its challenging moments, but in the end all was for naught. The local norms had evolved in both attitudes and acceptance, and the timing was finally right.

Today, hundreds of visitors from Richmond and DC to Raleigh and Charlotte, both gay and straight, come to celebrate. The Dare County Tourist Bureau is our primary benefactor. The list of businesses that participate in the three-day event has grown impressively long. And I am involved once again as a board member and marketing director for Pridefest.

My husband and I are headed down to the eighth Annual Pridefest this weekend, and I’m excited to see my friends from the GLC days.

But most of all, I’m excited to be home again in a place I’ve loved for 50 years and know that our little grassroots underground movement helped change it for the better.