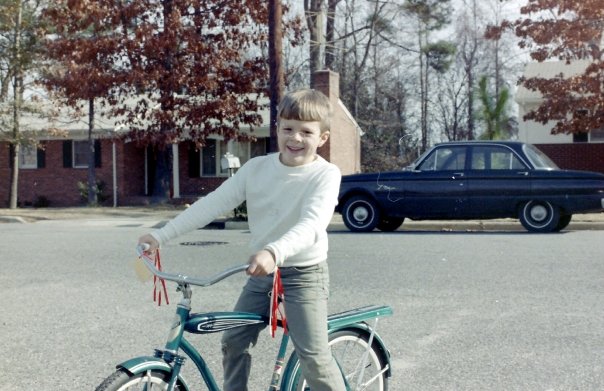 The tanned woman was looking down at me, her feathered hair cascading around
a perfectly formed face punctuated by two beautiful blue eyes.

I remember wondering why she would ask such a question. I didn’t think I was.
The Florida morning was warm but not steamy. Puffy cumulus clouds rode on a
fresh breeze that rattled the palms. It was a gorgeous day, and I had decided to go
for ride.

“No,” I replied, “I live right around the corner.”

“OK,” she shrugged, rolled up the car widow, and drove away.

I grabbed the handlebars, hit the pedals, and took off in the other direction.
I didn’t know that back on Minnesota Drive, my mother was freaking out. See, it
was 1966, I was four years old, and I had disappeared from our house about an
hour before. On my tricycle.

I also didn’t know that she had called the police, and at that very moment she was in
the back of a black and white, riding the streets of our neighborhood in search of
her missing son.

I didn’t care about any of those things. All I knew was that I was having a ball,
riding around in circles in the middle of the Volusia County Hospital emergency
entrance three miles from my parent’s house.

I had somewhat mastered the art of two-wheel tricycle doughnuts, which
involved accelerating to a breathtaking speed, pulling a hard left, then laughing
delightedly as I rose up on two wheels and careened in a circle.

The emergency room entrance seemed in many ways the perfect spot to practice
my stunt.

I don’t know how much time passed before I saw the police car approaching me.
My mother was hanging out the back window, screaming my name. She jumped
out before the car had barely stopped and ran to me.

“Eric, Jesus, you scared me to death Are you OK? Stand up and let me look at
you.”

As she examined me from head to toe looking for wounds and some sign of
regret, I looked up into the eyes of a tall dark man in a blue uniform. He had a
black bushy moustache. On his muscular left arm, he had a tattoo of an anchor.
He squatted down next to me. “Son are you ok,” he asked in a deep calm voice.

“I’m OK!” I said. My mother was almost whimpering with relief.

“Well, then, let’s get you home,” he said. I watched with awe as he stood and
picked up my tricycle with one hand.

My mother gripped my arm tightly, and we followed him to the cruiser. He
opened the back door with his free hand, and I scooted in next to my mother.

“Eric, I thought you kidnapped or worse. Don’t you EVER run off like that again.”

I wasn’t listening. Instead, I was peering over the seat at our officer who was
lifting my tricycle into the trunk. I couldn’t take my eyes of him as he slid into the
front seat.

He turned around, put his hand on my shoulder and said, “You scared your
mother buddy. Next time, be sure to check with her before you take off, ok?”

I nodded sheepishly. He tousled my hair, then started the car.

As he drove us home, I drilled holes in the back of his head with my eyes. Now I
knew. He had saved me from certain death.

He was my hero, and I wanted him to be my daddy.